How has your week been going? I hope that it has been a wonderful one! Is it just me, or has this week just flown by? But that's good, right? This means we're almost to the weekend! :)

This week I carved out some craft time, and got to work on something at the top of the list: creating a linen garland. Last fall, after making the Linen Wreath {here}, I tried my hand at a garland made from linen strips. However, stringing it onto twine {my first thought} did not work. My second thought was to use jewelry wire, and this did work, and this method used the same technique as to make the linen wreath. It just took me until now to get back to it. I know, how lame is that? ;) 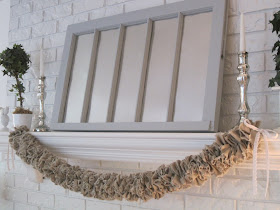 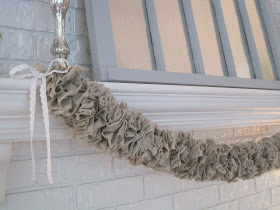 As with the linen wreath, I began by tearing strips of linen, about five or so inches wide. I found when I tore it versus cut it, the edges curled a wee bit, making it fuller and ruffly.
To make tearing the linen easier, I cut in a couple inches first.

Next I used an awl, which is pictured below; it is the small tool on the bottom. {The other tool is a pair of wire cutters.} 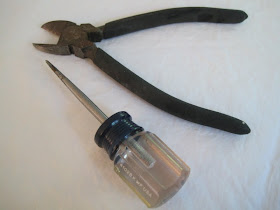 Starting at one end of each strip, I began making holes in the linen with the awl, spacing them about an inch or so apart. They do not need to be perfectly evenly spaced, and as you can see, mine sure aren't! ;) 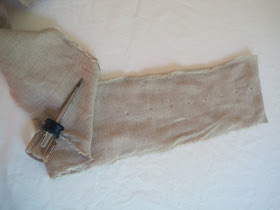 At this point, I started weaving my linen strips through the holes, 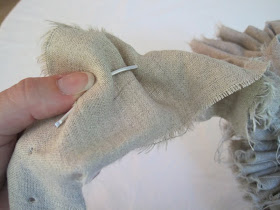 and scrunching up several folds at a time before sliding it down the wire, and weaving more of the strip on. 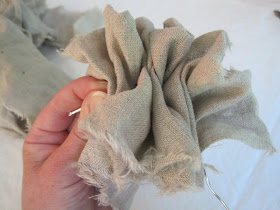 I continued this until my garland was right length, then shaped the wire ends on each side into hooks to hang the garland. 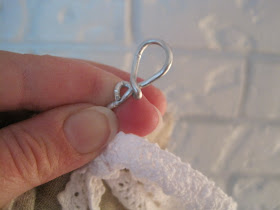 {I used thumb tacs on the top of my mantel to hang the garland from.}

I twisted the ruffles this way and that until I got the the look I wanted. 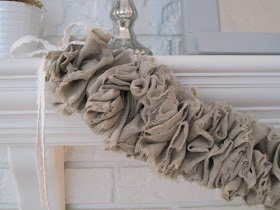 After it was hung, a little more tufting and twisting... 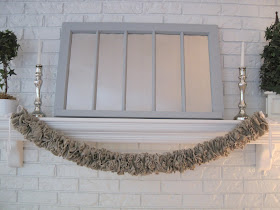 until it was just right. :) I also added a lace ribbon to each side...

Now if you would like to make your own ruffled linen garland, here is what you'll need:
awl
wire cutters
12 gauge jewelry wire
linen or linen look-alike
fabric scissors
decorative ribbon for ends {if desired} 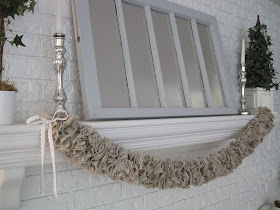 I am linking this post to:
{Air Your Laundry Friday} at Freckled Laundry
Frugal Friday @ The Shabby Nest
Weekend Wrap Up Party @ Tatertots and Jello
Feathered Nest Friday at French Country Cottage
Saturday Nite Special @ Funky Junk Interiors
The Sunday Showcase Party at Under the Table and Dreaming

I hope you all have a good night, and a beautiful Friday! And, as always, thanks so much for coming by! :)
Blessings,
Jenni
Jenni at 12:04 AM
Share

Thank you so much for taking the time to stop by and say hello! We love hearing what's on your mind, and your sweet notes make our day! We read and appreciate each and every one! We hope you have a beautiful day!